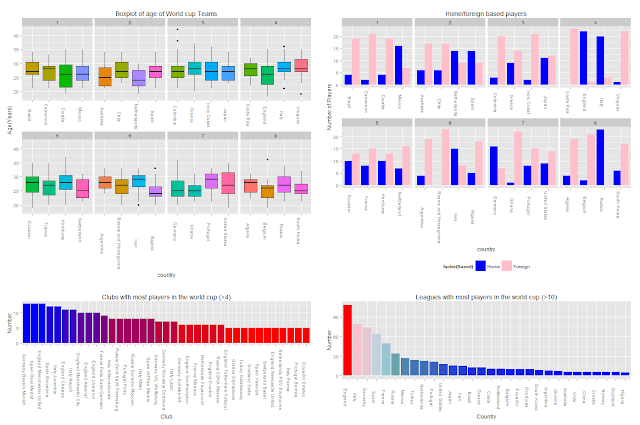 The data shows that the youngest team is the Netherlands(Dutch) team. Only Mexico, Netherlands, Spain, England, Italy, Russia, germane and Iran have more home-based players than foreign based players. Most teams have less players based in their home countries. The European clubs dominate the number of clubs with the most players in the world cup (again not a surprise)!! The world cup 2014 appears to be a sort of "European Cup"!!

Links to the scripts and input data

Posted by Noteswithoutemotion at 10:20 3 comments:

Here is a simple script modified from univie.ac.at that you can just run in R. Follow the instructions in the ensuing dilaogue boxes after running the script.

This RExcel interface will help you if you tend to work with people whose knowledge of R is weak but you want them to be able to use R-scripts that you share with them.

And the result: A new toolset complete with R_menus under the Addins Ribbon in Excel.

More customisations are described on univie.ac.at. Other
ways for working with R and Excel can be found here http://www.r-bloggers.com/a-million-ways-to-connect-r-and-excel/
Posted by Noteswithoutemotion at 12:54 No comments:

Curve testing and fitting in R

I have found this post to be very useful;
Posted by Noteswithoutemotion at 05:20 No comments:

Install and load missing specified/needed packages on the fly

This is a short script to help installing packages on the fly.It is most useful if you are distributing a set of script files to people who may not be aware that the needed packages are not installed on their systems. It is also useful if you use many packages and want to organise their installation (if missing) and/or loading at the beginning of a script.
Enjoy:

Posted by Noteswithoutemotion at 01:04 No comments:

I have been using third party programs for a long time until i came across the documentation for the R-package digitize. unfortunately, this package is not available for R 3.0.2 so i had to tweek things around. I am glad to share my solution.

I started by taking a look at http://lukemiller.org/index.php/2011/06/digitizing-data-from-old-plots-using-digitize/. Luke Miller has written a very nice description of how to use the digitize package. Some of the text here presented is from Luke Miller.

The code snippet below shows my implementation. I have added the use of the tcltk2 package so that one can browse and select the the jpeg file directly.


Posted by Noteswithoutemotion at 08:55 No comments: